As a young man of 17, I left home headed for college in the suburbs of Chicago.  From a small town in Wisconsin, I had little idea what was in store for me.  Paired with three other freshly-released teenagers in an apartment without supervision or accountability proved to be as you’d imagine it – too much for this kid who was trying to leave the perils of dual-life living behind him.  I was lonely and scared by the whole experience.  I remember lying in my bed crying out to God to meet me and show me His hand in all of this mess.  And that was when He led me to the love of a pastor.

One of the things I recall most about my first meetings with Pastor Ross was how warm he was – his smile was engaging, his tone friendly, his presence was calm, his eyes seemed to see me in a way that was intense but still safe.  He exuded something about really valuing the people around him.  Ross was one of those guys who never forgot a person’s name.  Over the course of only a few weeks, I felt as though he had set his kind, accepting care upon me.  The deepest impact of his care was that he extended to me a profound experience of being valued and accepted.  I had been struggling much of my young life to walk with God.  My focus was on how much I was not performing very well for God.  But instead of focusing on my sinful habits, his listening and caring offered me a picture of grace that refreshingly honored my value to him as distinctly different from my sin.  I’ve often wondered how I would have responded had he spent his energy trying to rescue me by making sure I really knew how bad my sin was.

Just this afternoon, as on so many days, I found myself reacting to my son’s disobedience by trying to show him more about how bad he was than how important he is.  Don’t get me wrong, my son needed to know that he was doing something that he should not be doing, but the way I corrected him was harsh and caused him to feel more small than wrong.  I was not engaged with the mission of loving this boy’s heart as I corrected his behaviors, but instead corrected more from my frustration at how he simply seems incapable of changing.  (Quite ironic seeing how his father is also incapable of changing on his own.)

Ross showed me my guilt, he exposed my sin by talking about it with me, but only after he had rightly valued me apart from my sin.  He showed me the first fruits of what I now know deeply: Guilt says you’ve done bad; Shame says you are bad.  Guilt points out what my son has done wrong but in a way that communicates his divinely and earthly appointed value.  Guilt in the context of value invites my son to keep his heart in the game with me.  Shame, on the other hand, is a deep and powerful weapon that strips one’s value (Imago Dei) and causes a heart to become protective.  It was Ross’ gracious invitation and prioritizing of my heart more than my behaviors that was instrumental in my decision to begin truly repenting.

Years later, after attending Bible college and getting married, Ross would again welcome me into community with him.  For six years, I served as worship pastor, following his steady, loving lead.  One Sunday, I pulled an anonymous note from my office mailbox from a parishioner that was less than approving of the “new” music that I was bringing to the church.  My stomach lurched to see the words “divisive” and “misfit for this job” sprawled across the page like a slap in the face.  Ross saw me reading the note and asked to see it.  With no more than a glance at the square of paper, he decisively tore it up, threw it in the trash, and with a seasoned smile said, “If they’re not brave enough to sign their name to it, we don’t entertain it.”  What’s that I hear?  The applause of every pastor reading this article?

Ross set me free to try and fail and risk trying again.  That’s saying a lot considering I was a young, naive kid fresh out of school.  I was actually trying to bring a band on stage at the church where Bill Gothard grew up!  There’s some good stories I could tell.  Ross displayed his strength to protect me on a number of occasions.  In the midst of this worship revolution I was leading, Ross preached a series on worship in which he took full leadership over worship style and informed folks that they could leave if they could not stay.  Ross’ strength of heart, identity and vision created strength for me to be able to minister with freedom.  Had he not possessed that security, he likely might have scrutinized my every move and become more controlling and critical.  His actions began to teach me that true love loves from an already secure heart.  Someone that needs their circumstances (other people’s thoughts, feelings, desires, etc.) to be peaceful in order for them to be secure (assured, content, confident) will wind up demanding that others be strong (right, conflict-free, easy) instead of granting them the freedom to be their true self.

Over time I had become convinced that my most effective calling was not as a worship pastor, and had been praying intently that God would lead our family to whatever He had next.  I shared these feelings with Ross several months earlier and it led us to several conversations about what a shift in ministry might look like should I stay at the church.  So on the day I walked into his office to have “the talk,” I was sick.  How would Ross respond to this news?  This had been a successful season for us both.  Would he see me as abandoning him? As being ungrateful?  I hated the thought of hurting him.  The lesson I experienced in my leaving was perhaps the most powerful of them all.

As I sat down in the chair in front of his desk, he looked up with a smile and received the news I was giving him about deciding to leave the church and pursue another field of ministry.  As he was so prone to do, his accepting smile that showed those friendly lines around his inviting eyes soothed my fears.  In the midst of his own discomfort, his secure love championed my freedom.  The man who invited me in so many times was now inviting me to leave.

The investment this friend, mentor, and pastor made in my heart continues today through the lives of my clients, my children, and my wife.  Thanks Ross. 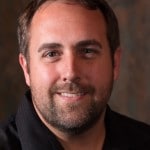 Rick holds a BA in Music and Theology from Moody Bible Institute, and received his Masters in Counseling from MidAmerica Nazarene University.  He has also completed significant graduate work at Covenant Theological Seminary and Moody Graduate School. Rick is known for a compassionate, pastoral care for his clients while maintaining a loving willingness to speak important words of truth.  He brings his relationship with the Lord into sessions and actively seeks to lead people to the true heart of God as is told to us in the Bible.  He and his wife have been married for 19 years, and together they have six children ranging from 3 to 15 years old.