Pastors Aren’t Here to Pump You Up!

One of the more influential churches in the New Testament period was that of Antioch. Now I don’t have any idea how many folks they had coming on Sundays, how many services or how big their building was, how many youth they had in youth group, how many programs, etc…I’m of course being a little facetious because I’m not sure they had a building other than someone’s house.

But if you want to consider the health of a church, look at the fruit of the church. Is it loving, patient, kind, gentle, pursuing godliness, resting in Christ, reaching out to neighbors, concerned for missions, etc….? When it comes to being outward focused, or what I often call “missional” (people use that term differently), no church seems to match that of Antioch.

Two of the more “famous” missionaries to be sent out were Barnabas and Paul. You probably have heard of the latter.

Our last core group meeting centered on the need for the pastor and church folk to recognize our functions. In Ephesians 4:10-16, we see Paul reminding us that pastors “equip” church folk for the “works of ministry.” Instead of simply “doing” the “works of ministry,” pastors “equip” the “saints” for the “work of ministry.” When the parts of the body are equipped and working properly, the body then builds itself up in love. That’s not a novel concept, since it’s found in the Bible, but it is probably novel to many. Christians have the responsibility to seek to be equipped so that they can build up the body. Having a rock-star pastor will not build up the body toward maturity; that is the job of equipped saints investing in each other’s lives.

So in other words, pastors, in the words of Hans and Franz, aren’t here to “pump you up.” We’re here to equip you to “pump each other up.”

One such example is the church in Antioch. In Acts 11, you can see that “those who were scattered because of the persecution that arose over Stephen traveled as far Phonecia, Cyprus, and Antioch…..men of Cyprus and Cyrene, who on coming to Antioch spoke to the Hellenists also preaching the Lord Jesus.”

These aren’t the 12 disciples; these are regular guys and gals with Jewish backgrounds who came to Jerusalem as Jews, and left as Christians. They had to leave, but they left and preached the gospel wherever they went. After the church in Jerusalem got word, they sent Barnabas and then more wore added. Barnabas then grabbed Paul and they taught and equipped the saints.

But the church was born because church folks (aka “saints”) simply did the early work of ministry, sharing the gospel and gathering people together. Then the pastors/teachers came to teach/preach to more of their friends, see them come to faith, and equip them. Before too long, Paul and Barnabas were sent out to church plant.

Of course Paul and Barnabas no doubt networked, evangelized, and gathered folks. But they were doing what the church was already doing before they arrived. They were co-laboring and the result was “more were added.”

One of the most influential early churches was started by laity evangelizing, gathering, and inviting their friends. It might be a good idea to follow the same blueprint to plant a healthy, influential church today. 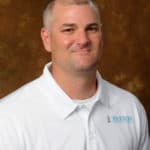 Geoff Henderson is a Presbyterian (PCA) church planter in Bradenton, FL. His wife Amy, along with sons Connar and Cade, and daughter Charis, have been a major part of planting Harbor Community Church, which launched on Easter Sunday 2014. When not fishing for men, he is fishing for redfish and snook in his kayak.