PastorServe is privileged to host numerous conferences each year held in locations around the country. ‘Survive or Thrive’ (based on our book by the same 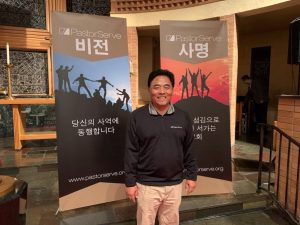 name) is our most popular conference. Thanks to the generosity of our friends at Harvest Graphics in Lenexa KS, we have two beautiful banners that we place at the front of the room at every conference. One banner proclaims the PastorServe Mission (why we exist) as ‘To Strengthen the Church by Serving Pastors’ while the other banner states the PastorServe Vision ‘That No Pastor Walks Alone.’ We keep our vision and mission before those attending our conferences as an ongoing reminder of the purpose and goal of this ministry.

It brings me great joy to see banners proclaiming our vision and mission in different languages. We have banners in English, Spanish and Creole. Last week was significant in the history of PastorServe as we had banners in the front of the auditorium in Queens New York in a fourth language – Korean! We were privileged to host our very first Asian American pastors conference. The event was organized by PastorServe’s newest team member, Paul Ju. Paul served the Korean Church in New York for twenty years before he and his wife Eunice moved to Los Angeles six years ago to serve Korean pastors. Paul is a passionate follower of Jesus who is zealous to serve the underserved Asian American pastor population.

The growth of the Korean Church in America is mind-boggling. In greater Los Angeles alone there are 1,600 Korean Churches! Seattle has more than 250 Korean Churches. Denver has close to 200 Korean Churches as does Phoenix and San Diego. And the above numbers do not include other Asian churches! The need is massive, particularly on the west coast.

At the New York conference we gifted a Korean version of Pastors are People Too to every attendee. As you might remember, this book was translated after a group of Korean pastors read the book and concluded that the message was essential for the church of South Korea. They approached South Korea YWAM (Youth with a Mission) leadership who reached out to David C. Cook to form a partnership. The book was translated, published and has been distributed by YWAM missionaries throughout S. Korea!

Interesting, there are numerous differences between American pastors and Korean pastors. American pastors have a heart attack rate five times higher than Korean pastors! Health experts point to the highest contributing factor being that Americans are raised in an individualistic culture while Koreans are raised in a family culture where connection is highly valued. While this leads to a lack of privacy and other challenges, Koreans understand the need for community.

During the conference in Queens our team addressed the issue of shame, which is a significant part of Asian culture. Sadly, we know of Korean pastors who have found themselves embroiled in conflict, and rather than taking steps to biblically resolve the disagreement, they have packed up their car and moved in the middle of the night! Some have fled rather than face a significant challenge.

We are excited for Paul to continue to open doors to the Asian American community. We anticipate conferences similar to the New York conference to be held up and down the west coast.

Thank you for being a part of the PastorServe calling to Strengthen the Church by Serving Pastors. Through your continued partnership, we continue to minister to thousands of leaders – many of them Asian. We could not do the work of this ministry apart from friends like you. Thank you!!

Until No Pastor Walks Alone,

PS PastorServe has been blessed with a $100,000 matching challenge for all gifts received before the end of 2019. Please make a special gift a matter of prayer.