Dick Vitale called this the greatest cheer in college sports. The Rock Chalk chant starts every basketball game and rains down at the close of every home victory.

While I have passionately maintained that the Rock Chalk chant is the greatest tradition in all of sports – I have recently changed my mind. I have now come to believe that the greatest sports tradition in the world is the singing of the song “You’ll Never Walk Alone” before the start of every Liverpool Football Club game at Anfield, the historic soccer pitch of the Reds. 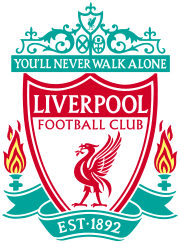 You know the song.  It has been recorded over 100 times by everyone from Elvis to Frank Sinatra to Pink Floyd to Johnny Cash.  Jerry Lewis closed his MDA telethon every year by singing the song.  As recently as September of this year, the song was number one on iTunes following an online campaign by Liverpool fans to raise awareness for the ninety-six Liverpool FC fans who lost their lives in the 1989 Hillsborough stadium tragedy.

You’ll Never Walk Alone was written in 1945 by Rogers and Hammerstein for the movie Carousel.  For nearly twenty years, the song was relatively unknown until 1963 when Jerry and the Peacemakers recorded the song at Abbey Road Studios in Liverpool.  It soared to #1 on the pop charts and was immediately adopted by the local football club as the team anthem.  And, for nearly fifty years, the song has been sung by 45,000 LFC fans before every home game.

The lyrics are unspectacular.  The song speaks to walking through the storms of life.  The wind and the rain of life will toss you about – but you can walk on with hope in your heart, because you’ll never walk alone.

And yet, the song reaches deep into our heart.  Life is hard.  There are painful storms and agonizing rains that pound against our spirit as we walk through life.  And, while our greatest fear is that we would walk through the storms alone, the song holds out hope that there are others walking by your side.  The song is one of hope, unity, courage and above all, friendship.

The song makes me think of the pastors and the isolation so often magnified by the ministry.  Pastoring is lonely.  Sadly, eight out of ten pastors report that they walk alone.  They don’t have anyone they consider a close friend with whom they can walk through the storms of ministry.

And yet, there is something deeper.  Why does this song strike such a profound chord?  Because it reminds us of the Gospel.  The good news of the Gospel is that Jesus Christ came to earth so that we would never walk alone.  Proverbs 18:24 reminds us that there is a friend who sticks closer than a brother.  Hebrews 13:5 promises us that Christ will never leave us.  Indeed, we never walk alone.